Weather in Iceland: Month by month

Icelandic weather isn't known for long hours of sunshine and hot summer days. In fact, it's safe to say the weather in Iceland pretty cold and grey year-round. Yet, it might surprise you to know that while the Icelandic summers aren't very warm, the winters aren't actually that cold. Well, considering it's a remote island at the windy confluence of the Atlantic and Arctic Oceans.

While the temperatures in Iceland might not vary much from month to month, there are many other weather factors that make each season differ quite drastically. In this article, we explore those weather factors, including rain and snowfall, daylight and sunlight, and the Northern Lights, and how they define each month of the year. So if you're trying to decide which month is best for you to visit, read on ? you'll soon have your answer.

Here, you can find a summary of Iceland weather by month to help you figure out which one is best suited to your travel preferences. Each month is summarised by its temperature, rain and snowfall, daylight and sunlight hours, and Northern Lights visibility. We also highlight the pros and cons of each month just to make your decision that bit easier.

With lows of -3°C and the highest amount of snowfall, January is the coldest month of the year to visit Iceland. Although, this temperature is much milder and more manageable than most people might expect. The country might be called Iceland, but its name is quite deceiving!

Averaging only one hour of sunlight a day out of only 4.5 daylight hours, it's also Iceland's darkest month. While this leaves little room in the day to see Iceland's sights, it leaves plenty of time for the Northern Lights to make an appearance.

With lows of -2°C, February isn't much warmer than January. In fact, its average temperature of 0°C is exactly the same. While there are seven hours of daylight in February, which is much more generous than the previous month, you can still only expect to see around two hours of sunlight in that time. Although you can expect fewer rainy days in February, it often rains quite heavily.

This month also promises one of the heaviest snowfalls too. Overall, it's a great month to see a snow-coated Iceland and the Northern Lights whilst getting enough daylight hours to visit your must-see sights.

With lows of -2°C and an average temperature of 0°C, March is just as cold as January and February. However, the weather starts to perk up in other ways this month. By the end of March, you can expect around 10 hours of daylight, four of which promise to be sunny. This means there is much more time to enjoy the great Icelandic outdoors!

That said, there's around 215mm of snowfall in March altogether, so the ground conditions may not be great for inexperienced hikers.

In April, temperatures will rarely go below 0°C, but most days are between three and five. There's much less snowfall and rainfall too. Finally, signs of spring! By the end of the month, you can expect 14 days of daylight which is a much more ?normal' amount for those that don't hail from the far north.

During these 14 daylight hours, you can also expect around five hours of sunshine. April is, therefore, relatively the sunniest month of the year! However, the chances of sighting the Northern Lights are slimmer than in previous months, but still fairly possible.

Icelandic Weather in May

As temperatures continue to rise (between 3-9°C), May sees barely any snowfall but a high chance of rain. In fact, with an average of 21 days and 40mm of rainfall, it's the second wettest month of the year behind September. However, you can also expect up to 6 hours of sunshine per day. Out of 16 hours of daylight, this is pretty generous!

These extremes of rainfall and sunshine mean May's weather is fairly changeable, even throughout a single day. As long as you pack a raincoat, there's no reason why you can't spend plenty of time in the great outdoors.

This makes June a promising month for outdoor adventures. However, since it receives an astounding 20 hours of daylight due to the earth's tilt towards the sun, there are no Northern Lights tours in operation this month.

In July, temperatures reach up to a tropical 13°C, the chances of rain are slim, and there's around six hours of sunlight per day. As the warmest and driest month of the year, July is the best time to enjoy Iceland's natural wonders.

Since there is generally no snow on the ground, it's also the best time to explore Iceland's more remote regions like the Highlands and Westfjords. With 21 days of daylight, however, you might suffer from insomnia and you can forget seeing the Northern Lights!

Just like July, temperatures reach up to 13°C in August, which brings it in at joint 1st for the warmest month of the year in Iceland award. However, it averages 23 days and 30 mm of rain per month, which makes it a slightly wet one too. Don't let that dampen your spirits though (pun intended) as August also sees around six hours of sunlight per day.

While this means the weather in August can be fairly changeable and unpredictable, it's pretty pleasant overall. Offering a generous 18 hours of daylight, don't expect to see the northern lights in August either.

With highs of 9°C and lows of 5°C, September is, surprisingly, one of the warmer months in Iceland. However, you can begin to expect less sunlight (around four hours) and a little more rain than in the earlier summer months. Still, it is considered one of the best months to visit for good weather in Iceland.

Since there are no signs of snow and at least 12.5 hours of sunlight, September provides an excellent opportunity for outdoor adventures and a fair chance of seeing the Northern Lights.

While Iceland is creeping into now, temperatures remain above 0°C so you don;t have to be concerned about freezing. However, it's noticeably nippier than September. In some parts of the country, you might see a light snowfall, but those areas are usually closed to tourists by this point.

Averaging 21 days of rain and around 30 mm, a bit of rain is probable. Since there will be at least 11.5 hours of daylight this month, there's still a good opportunity to spend lots of time outdoors and to see the Northern Lights.

With around 8 hours of daylight, there's still a good chance to enjoy a full day of activities, but don't be disheartened if you only get one hour of sunshine. To make up for it, the Northern Lights are highly likely to make an appearance this month.

As December swings around, winter in Iceland hits with full force. This month sees the second heaviest rain and snowfall after January. Plus, the temperature averages at about 2°C and often dips below freezing. Towards the end of the month, you can only expect around 5 hours of daylight, and almost no sunlight. This makes it much harder to enjoy long hikes and other outdoor activities this month.

On the plus side, December promises one of the highest likelihoods of seeing the Northern Lights. There's also a good chance of seeing Santa and his elves.

FAQs on the Weather in Iceland

How Sunny is it in Iceland?

As a country with drastically shifting daylight hours, Iceland doesn't get much sunlight overall. During the winter months (November - February) you can't expect more than two hours of sunlight per day, but in the dead of winter the sun is down for around 20 hours per day so there is rarely any sun rays at all. Your best chance for finding some Icelandic sunshine is between May and July when you can expect up to six hours of sun per day.

How Cold Does it Get in Iceland?

Despite its name giving you a chill, Iceland is actually fairly mild for a country edging toward the Arctic Circle. In Reykjavik and other lowland areas, it rarely reaches below -3°C in mid-winter. However, temperatures only rise to highs of 13°C with lows of 7°C during the summer months. This defines Iceland's weather as the least changeable in Europe.

How Much Does it Snow and Rain in Iceland?

Between November and April, you're likely to see thick snow in Iceland. While it doesn't snow between June and September, it rains in Iceland all year round. However, it often experiences light drizzles rather than heavy rainfalls. Especially in August and September which have around 23 days of light rain. January experiences the heaviest rainfall in Iceland while the months of April, June, and July experience the least.

Even though the weather can be rather unpredictable in Iceland you can still follow the best websites to receive updates on the weather, as well as road and travel conditions.

Become weatherproof with a 4x4 in Iceland

Whether Iceland is blanketed by snow, drizzling with rain, or basking in the sun, it's easy and safe to drive around Iceland in a 4x4. These vehicles are built to handle every scenario the weather in Iceland might throw at you. Ice. Snow. Mud. Even rivers. So speak to us today to hire your own 4x4 in Iceland or read an article about the benefits of renting a 4x4 in Iceland here. 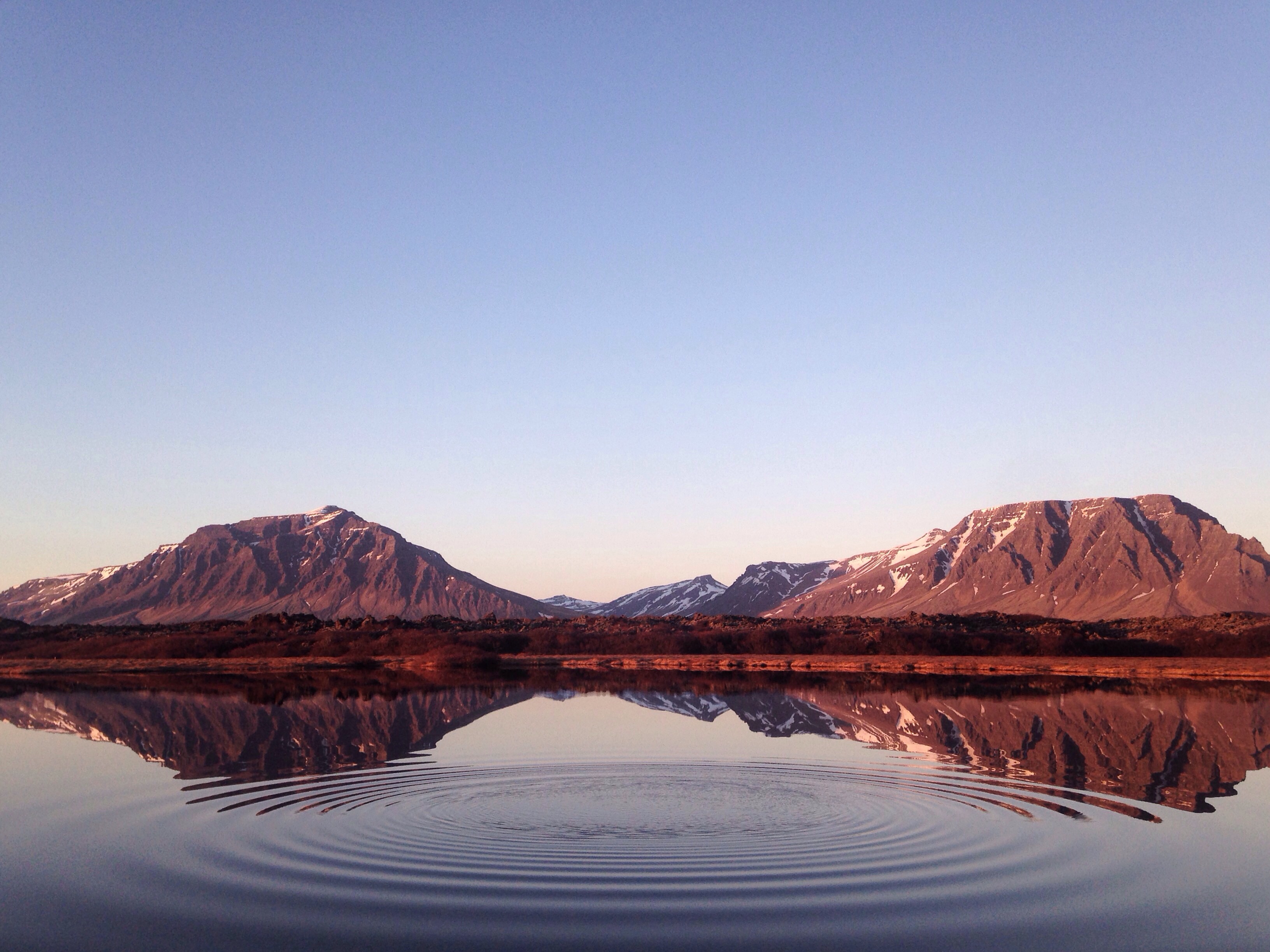